Heavy-duty vacuum cleaners are often required to deal with commercial and industrial locations. Not only will these units offer more suction power than domestic versions, but they can cover extremely large areas of space within relatively short periods of time. 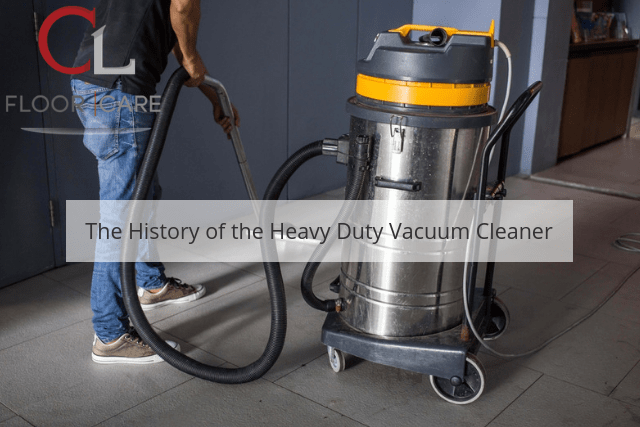 However, such machines did not come into existence overnight. They are associated with a history of more than 150 years. Are you curious to learn more about the origins of modern commercial vacuum cleaners? If so, the information below should prove to be quite insightful.

The first vacuum cleaner known as a “carpet sweeper” was invented in 1860 and it used a series of brushes and bellows to remove dirt from the surface of a floor. As this was before the mainstream advent of electricity, the unit needed to be pushed by the operator in order to function. This all changed during the first decade of the 1900s when commercial electricity was first made available.

The Introduction of the Internal Combustion Engine

During the initial portion of the 20th century, vacuums began to be equipped with small internal combustion engines. These operated under a principle known as “pneumatic carpet renovation”.

This engine vastly increased the efficiency of the cleaner and little manual labour was required by the operator (other than guidance and steering).

It should still be noted that the large-scale presence of both domestic and heavy-duty vacuum cleaners was not generally seen until immediately after the Second World War.

The Adaptation to Industrial and Commercial Environments

The term “industrial” is often used when referring to heavy-duty vacuum cleaners. The main difference between these units and their domestic alternatives can be seen in their design.

The majority of heavy-duty vacuum cleaners are equipped with more powerful engines and they often contain a vertical drum that is supported by a set of castors. This helps to accommodate for any increased weight.

These vacuums have been designed to hold a large volume of debris and most contain additional accessories such as hoses and different cleaning attachments. You may visit iconvert.media.

It is clear that the history of heavy-duty vacuums is diverse and interesting. Thankfully, you can enjoy all that modern technology has to offer when working with the team at CL Floor Care. Do you require an industrial-strength vacuum cleaner for an upcoming project? Feel free to contact us in order to discover the available options.